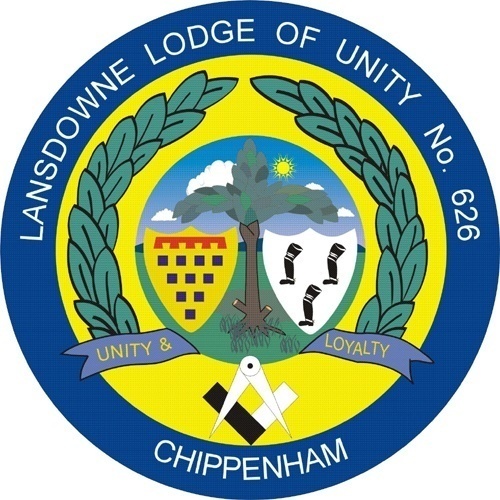 The Lodge meets on the second Tuesday in every month at 6.15pm (except June, July and August)

Installation at December meeting when the Lodge Tyles at 5.00pm

This lodge was founded immediately after the appointment of Lord Methuen in 1853 as Provincial Grand Master, and he installed his Deputy Provincial Grand Master W Bro Daniel Gooch as its first Master. The meeting was held on January 17 1854 at the Town Hall, Calne, under the number 909. Things did not go well for the lodge and Grand Lodge subscriptions were paid by one or two brethren otherwise it would seem that the Warrant would have had to have been forfeited, and on February 8th a proposal was to go to Grand Lodge asking for permission for the lodge to meet alternatively at the Lansdowne Hotel in Calne and the Angel Hotel in Chippenham.

Then there were no meetings of the Lodge between 8th March 1862 and 1868 when in December, of that year, the number of the lodge was changed to 626. During that period of "rest" the Lodge warrant had not been withdrawn as the Treasurer, Bro Joseph Lane, had paid the fees from his own pocket.

The following year, 1869, Bro Gabriel Goldney MP was elected as a joining member and in, 1870, another M.P. Brother Robert Nicholas Fowler, was also elected as a joining member. Both filling the chair of the lodge at some time. The first Master of the Lodge, Sir Daniel Gooch MP was, later, appointed PGM for Berks and Bucks and he "used his great influence and popularity" to successfully resuscitate the Lansdowne Lodge and re-establish it at Chippenham where the numbers steadily increased.

Bro Goldney was installed as WM in 1873, and during his year in office he was also the Deputy Provincial Grand Master for the Province of Wiltshire, and on 1 August 1876 he installed Bro R.N. Fowler MP into the chair of Lansdown, Brother Fowler was later to become Lord Mayor of London.

The second Lord Methuen, the dedicating officer, was Provincial Grand Master from 1853 to 1891. Although the Lodge had been so speedily re-dedicated, finances were not good, and during the next four years there was no improvement. In December 1859 accounts of the lodge were examined and the Treasurer stated that a considerable sum was due to him besides there being several arrears of subscription. Following this period, on several occasions, as many as six candidates were balloted for and separately initiated during the afternoon and after a break the lodge was reopened and five fellow craft were raised to the degree of a Master Mason. William Henry Poynder was proposed in October 1855, initiated in November, passed in December and, later in January 1856, was raised in the afternoon and at the installation ceremony, later that afternoon, was installed as JW. He only attended once afterwards.

F H Goldney was a joining member in May 1869. Mayor of Chippenham in 1874 and 1888. Provincial Grand Treasurer for 43 years from 1877. He produced the first History of Freemasonry in Wiltshire. In 1933 Bro W M B Burridge, the Junior Warden, had offered a site in the centre of Chippenham, as a gift, on which to erect a Masonic Hall. Plans were prepared, by two members of the lodge, and tenders called for. Total cost was thought to be £1870, including the furniture. This first Masonic Hall in Chippenham was built behind the High Street and on a piece of land that is now covered by the rear of Woolworths. Later a very advantageous price was offered for the site, thus enabling the new Masonic Hall to be built in Emery Lane. The Foundation Stone was laid, on 8 June 1971, by the Provincial Grand Master. The Foundation Stone of the earlier building, having been moved, was re-laid by the Deputy PGM.