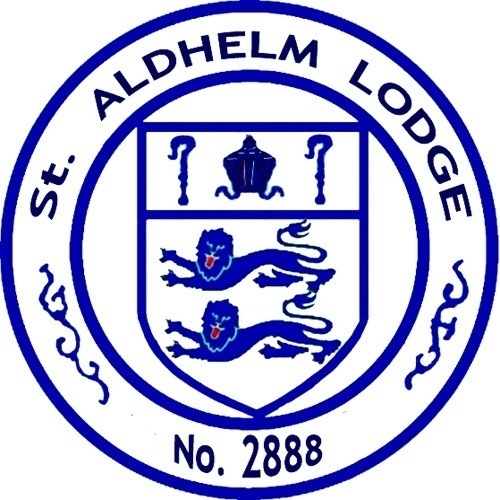 The Lodge meets on the third Tuesday in every month (except June, July and August)

the Installation meeting in September when the Lodge Tyles at 5.30pm

History of the St Aldhelm Lodge No 2888

Towards the end of the year 1900, Henry Hewer, Manager of the local Bank, approached Joe Moore, a forage merchant, and suggested that the town could support a Masonic Lodge.  Baldomero de Bertodano, a retired Solicitor, who had already achieved high honours in Craft Masonry, holding Grand rank as a Grand Steward, and who was also a Past Grand Warden of the Province of Kent. He and a brother had recently moved to Malmesbury and showed interest in a local Lodge. So on January 31st 1901, at 3 p.m., at the Bell Hotel, it was agreed to petition for the formation of a new Lodge. Provisional fees were to be £1. 5s subscription, £1. 10s Joining fee and £5.5s for Initiation. There was some delay, the Provincial Grand Secretary did not want to do anything, so a strong letter was sent to him in October threatening an appeal to the Deputy Provincial Grand Master. The amazing thing, regarding this delay, was that the Provincial Secretary, Bro Harry Bevir, was to be one of the Founders of the Lodge!

This letter did the trick and on January 14th 1902, the Petition was accepted and the new Lodge given the number 2888 and the name St Aldhelm. St Aldhelm was the very peripatetic priest who worked his way across the country and had served at Malmesbury, as the founder of Malmesbury Abbey, a home for Benedictine Monks, and where Athelstan, King of England, is thought to be buried. Over the entrance porch of the Abbey there is a good collection of Mason's marks, put there by the old craftsmen who built the wonderful structure, which had a spire.

Poor Brother Hewer, after having done most of the work, was moved by his bank a long way away, so he had to hand over to Bro Thomas Reed who was a wine merchant.

The Lodge was consecrated on 31st July, 1902 and to mark the occasion, one of the Founders, W.Bro. Rev. H.Kendrick Adkin laid a corner stone at the base of the new Technical school then being built. He was to be the first Junior Warden of 2888. The Presiding Officer for the Consecration was the Provincial Grand Master, The Earl of Radnor, assisted by the DPGM. W Bro Charles N P Phipps, and the first Master was W.Bro Baldomero de Bertodano, He also did two short spells as Director of Ceremonies of the Lodge. He was also responsible for much of the Lodge furnishings still in use. His brother Carlos Edmundo de Bertodano was senior warden. He too was a Grand Steward and, after a blank period in the Lodge, acted as Secretary for a long time He was mainly responsible for the gift of the officer's jewels still in use. Although these brothers' names seem continental they were very English Victorian gentlemen.

Among the other Founders was Viscount Dungarvon, Provincial Grand Master of Somerset. He did not do much for the Lodge and resigned in 1903. He was an Irishman and on the death of his father he inherited the title Earl of Cork and Orrery.

Brother Sir R.Hungerford Pollen Bt., of Rodbourne, also did not last long, he was the first Treasurer but resigned from the Lodge just Over two years later. Another founder was Col. W.W.Turnor (a very fierce J.P.) who only stayed until 1906.

For many years the Lodge met at the Bell Hotel, the billiard room being used, the owner being a founder of the Lodge and for many years the Director of Ceremonies. Joe Moore a very "peppery individual" and one real character! The Lodge Banner, was made by the ladies of some of the brethren, including four Miss de Bertodanos.

1906 the Lodge agreed to the formation of a Chapter. The next year it was confirmed from Grand Lodge that St Aldhelm Lodge had duly qualified as a Hall Stone Lodge having made £525 for the Masonic Memorial Fund. This Jewel was presented to the Master, Bro H W White, who attended Grand Lodge, with the J W, on 2nd Sept 1925. On the 29th May 1928 the Lodge, attended a ceremony of re-opening and re-hallowing Malmesbury Abbey, after its restoration. The Lodge had provided the Pulpit on which can still be seen the Square & Compasses.

At the end of 1946 the Lodge meetings were moved to the Town Hall. The first meeting was so cold that Brethren wore overcoats in the Lodge. All the heating pipes had frozen and burst. Arrangements for meals were non-existent. In 1973 the Lodge moved to the Parish Hall, Silver Street and was later able to purchase this property.  Jan 1951 saw the start of the practice of presenting every candidate, on the completion of the third degree, with a copy of the Volume of the Sacred Law on which he had taken his three obligations.

Over the years the building at Silver Street has been improved and enlarged.