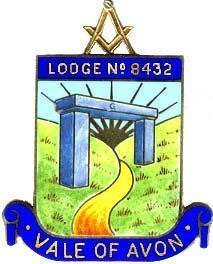 The Lodge meets at 6.30 pm on the first Wednesday of the months of February, March, April, October, November and December

Installation at December meeting when the Lodge Tyles at 5.00pm

History of the Vale of Avon Lodge No. 8432 Chippenham Wiltshire

The seed was sown in Corsham on Thursday 27th May 1971.  It happened at the Installation Meeting of the Corsham Lodge No 6616. The Provincial Grand Master RW Bro Reginald A C Forrester whilst responding to his toast, suggested that conditions were right to found a new Lodge in North West Wiltshire.  He remarked that the population of the region had grown considerably and further housing developments, especially in Chippenham, were planned which suggested that such a new Lodge could be supported.

The seed fell upon fertile ground because four Masons left that meeting thinking about the possibility of founding a new Lodge. Those Freemasons were Bros Fred Hudson, Michael Glanz, Cliff Davies and  Bill Harvey. These founding fathers gathered a number of suitable Founding Members and after just three weeks thirty-four Freemasons expressed an interest in the project.  At their first meeting
twenty-six masons committed themselves to becoming Founders of the new Lodge. Unfortunately, of those original Masons, Bro Fred Hudson died and Bro Fred Marlow moved to Cyprus before the Lodge was consecrated and there were, consequently, just twenty-four petitioners.

Three general meetings of all the Founders were held during which the details of the founding of the Lodge were discussed and agreed. The main concern of the first meeting was to agree upon a name and crest for the new Lodge. Bro Marlow led the discussion and the Brethren finally agreed upon the name ‘Vale of Avon’.

The design of the crest was the inspiration of Bro Cliff Davies and Bro Bill Harvey.  The whole crest neatly encapsulates the idea of place and symbol.  The trilithon alludes to the ancient monuments that are most closely associated with Wiltshire.  The sun rising between the upright stones brings Avebury and Stonehenge to mind and it also refers to a symbol closely connected with Freemasonry.  The river running through the green and pleasant land holds biblical and Freemasonic connotations and also refers to the River Avon, which flows through north and west Wiltshire. The Petition to apply for a warrant to hold a new Lodge was presented in late 1971.  To the Petition was added the recommendations from the Lansdowne Lodge of Unity No. 626 and the Corsham Lodge No. 6616.  Each recommendation having been signed in open Lodge by the Master and Wardens with the approval of a majority of the members.  In the petition it was stated that the aim of the Lodge was to cater for members of the
Craft who were Masons and had come to settle in the area.

Early on it had been decided to base the Lodge in the newly built Masonic Hall in Chippenham. The Provincial Grand Master, R W Bro Reginald A C Forrester, laid the Foundation Stone with full Masonic Honours on the 8th June 1971.  The Vale of Avon

In its early years the Lodge flourished.  Under the guidance of Michael Glanz, who became the Director of Ceremonies, the Lodge quickly developed a distinctive character of its own by adding certain touches to enhance the Emulation Ritual upon which the work of the Lodge was based.  Cliff Davies, who was Secretary for the first thirteen years, ably conducted the administrative business of the lodge.

The original optimism and judgement of the Founders has proved correct as most of our members are men who have come into the area having no Masonic connections and who have found a welcome at the Vale of Avon Lodge No.8432.