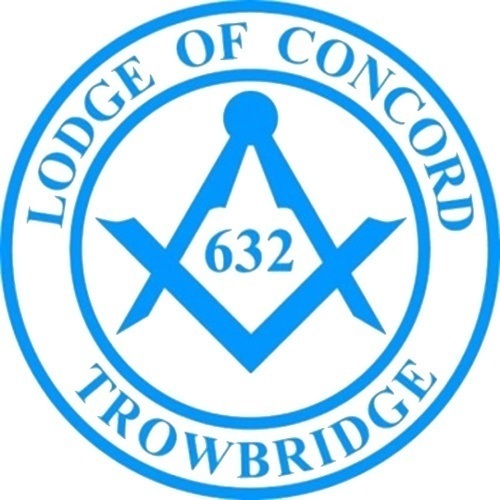 The Lodge meets on the second Monday in every month at 6.30pm (except June, July and August)

Installation at January meeting when the Lodge Tyles at 5.00pm

History of The Lodge of Concord No.632

No records can be traced of the subsequent Masters of the Lodge; the only records that were obtained from Grand Lodge show 17 initiates between 1831 and 1841.

In 1851 the Lodge of Concord was erased from the list and the warrant declared by the Grand Lodge to be forfeited for non-compliance with the Laws for some time previous.

Endeavours were made by W.Bro Daniel Gooch, Deputy Provincial Grand Master of Wiltshire, to get the old Warrant reinstated, but this proved impossible and on 24th March 1854 a petition was presented for a new warrant to meet as a regular lodge, on the Tuesday nearest the full moon in every month and there to discharge the duties of masonry, in a constitutional manner, according to the forms of the order, and the laws of the Grand Lodge.

Edward Roberts (an Architect to the Great Western Railway and a past master of Middlesex Lodge No.167) was approached by Daniel Gooch, and accepted as the First Master; the first Senior Warden was John Loykyer Seale (A Doctor of Medicines in Steeple Ashton, and a past Master of Royal Sussex Lodge No.69 in Bath); the first Junior Warden Frederick Webber (A Solicitor, Clerk to the County Court, and a brother in Royal Cumberland Lodge No. 48, Bath) and the other Brethren were:

The Consecration of the Lodge of Concord (then numbered 915) was held at the Court House in Trowbridge on Tuesday 16th May 1854 by consecration officer Daniel Gooch, assisted by Bro M C Rea, Provincial Grand Secretary.

On 23rd January 1866 saw the first meeting of the Lodge of Concord to be held at the Masonic Hall in Silver Street, and it was used as such until 9th May 1904.

In 1869 the petition from Bradford brethren was signed, the first daughter lodge "Friendship & Unity No.1271" and, then on 9th September 1873 another petition was presented on behalf of the brethren residing in Warminster, for a lodge in that town.  This was accordingly endorsed, and the Longleat Lodge No. 1478 was born.

On the 19th March 1904 saw an emergency meeting held to consider an offer of the Music Hall in Marlborough Buildings for the use as a Masonic Hall, and it was decided to purchase the same for the sum of £300.

13th July 1904 saw the dedication of the new Masonic Hall, Hilperton Road, by the Right Worshipful Provincial Grand Master of Wiltshire, The Right Hon. The Earl of Radnor.  39 members of the lodge were present and 114 members from 19 lodges.  After the dedication ceremony and closing of the lodge the Brethren adjourned to a Garden Party at Highfield, at the kind invitation of W.Bro W.J.Mann.

On the 10th May 1943 a petition was submitted for the foundation of a new lodge to be called "Clarendon". This Lodge was consecreated on 3rd February 1945 by the Deputy Provincial Grand Master W.Bro G.E.Thornton PrJGD.