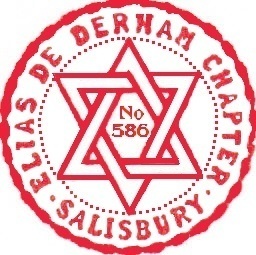 The Chapter meets at 6.00pm on the third Wednesday in January, March, September and November. 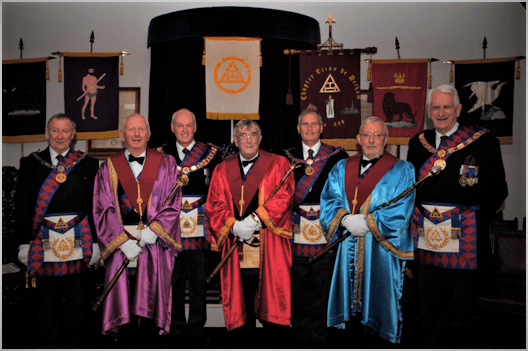 So what’s unique about a Chapter Banner dedication?  I hear you ask.  Well, if you have waited 150 years until you get round to designing and producing a banner and then invite wives and non-Companions to the dedication ceremony, that is unique.   And that is exactly what The Chapter Elias de Derham No. 586 in the Province of Wiltshire did on the 20th of September 2017.

Twelve months earlier, at a committee meeting where there was a certain amount of discussion as to how the sesquicentennial anniversary (150 years) of the Chapter might be celebrated, someone suggested that it might be a good idea if we commissioned a banner, particularly as we were one of the Chapters under whose banner the forthcoming Provincial Convocation was to be held.

It was then mooted that the Banner dedication ceremony could be elevated to ‘special’ if the subsequent Festive Board was a ‘white table’ and the Companions’ wives/partners  be invited.  This triggered an outburst of ‘blue sky thinking’ which culminated in an enquiry to Provincial Grand Chapter to ask, if the Chapter met briefly to deal with day to day matters and then closed, would any rules be transgressed if the Ladies were admitted to the Temple to witness the Dedication Ceremony conducted by the Provincial Team.  To keep a long story short,  the powers that be, considering the current climate of openness pervading Freemasonry today, said “Yes!” and we made history.

The design of the Banner comprises two sets of symbols; those generic of the Royal Arch, and those specific to Elias de Derham.  The generic symbols are the colour of the Banner itself, a triangle enclosing triple tau, and a circle formed by the Chapter name and number.  Those symbols specific to the Chapter define its association with the locality and comprise images of Elias de Derham, Salisbury Cathedral and Magna Carta.

The background of the Banner is crimson, the appropriate colour of the Holy Royal Arch; the Triangle and Triple Tau is an ancient symbol representing the Deity and the circle alludes to Deity’s all-embracing aspects.

Elias de Dereham was an eleventh century English master stonemason who, as a Canon of the Salisbury diocese, oversaw the construction of the Cathedral.  He was also present at the signing of Magna Carta at Runnymede in 1215 and charged with distribution of copies of the original document; one found its way to Salisbury and is now displayed in the Cathedral Chapter House. 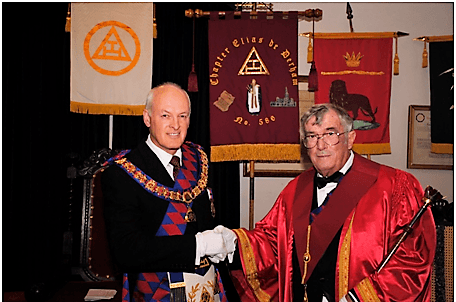