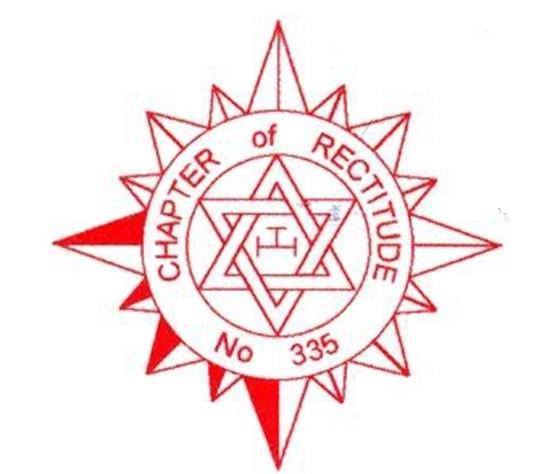 Subjecty to the provisions of Rule 58, Royal Arch Regulations, the First Principal of the Chapter may direct that the October Convocation be held at an alternative venue.

The Chapter Badge, is a representation of three of the basic elements symbolising Royal Arch Masonry in general.

First the circle which is without beginning or end and is therefore an emblem of eternity, the circle encloses two interlaced triangles representing our twofold nature, spiritual and material; whilst the triple tau in the centre is an allusion to the deity.

These three elements are superimposed on the compass which, by highlighting the southern and western cardinal points, and their subordinates, symbolises the Chapter of Rectitude in particular and the geographical area it is intended to represent; It is also emblematic of the blazing star or glory, depicted on many Royal Arch Jewels.

The Chapter was established for the benefit and support of senior Royal Arch Masons of the southern and western Royal Arch Provinces of England and Wales, and as such other Brethren and Companions as may be acceptable to the members of the Chapter.  It was further intended that the Chapter would be able to foster the existing bond between these Royal Arch Provinces, and to provide a forum for the presentation and discussion of matter of mutual interest.