The Order was first worked in England in 1777, having probably originated in France. There are two Degrees: Knights Templar and Knights of Malta, these being joined by a ‘passing’ Degree of Knight of St. Paul.  A candidate for the first Degree is in the position of a pilgrim travelling symbolically through hardship and dangers until he is received as a Knight. It teaches humility and urges the candidate to live his life as a Christian Knight. The second Degree deals with the period when the Knights travelled from Palestine to reach their final home in Malta, emphasising their Christian virtues.

For more information on the Order of Knights Templar or to give it its proper title: The United Religious, Military and Masonic orders of the Temple and of St John of Jerusalem, Palestine, Rhodes and Malta in England and Wales and Provinces Overseas,  please contact the Vice-Chancellor: Terry Jessop or click on the link to the Provincial Priory of Dorset & Wiltshire.

The Prior for the Provincial Priory of Dorset and Wiltshire is Richard Francis Micklefield.

I was born in Hampshire and before I was 2 my family relocated to Twickenham, Middlesex where I grew up.  I went to school in Teddington and gained an apprenticeship with Hawker Siddeley Aviation and while there I gained a MSc in Aircraft Design at Cranfield Institute of Technology.

I continued my employment with Hawker Siddeley Aviation, British Aircraft Corporation and British Airways.  An opportunity arose for me to continue my aviation career in Hong Kong and in 1984 my wife, son and I moved to Hong Kong where I enjoyed 9 years of expatriate life, unfortunately that came to an end and I returned to the UK via a short stay in Abu Dhabi and Bahrain until I found a post with Shorts Support Services at Bournemouth Airport. That lasted 6 months, and I left Shorts Support Services and founded ATL a small Aircraft Design and Certification company also at Bournemouth Airport.

I was initiated into craft Masonry in the Red Scarf Lodge No 8448 on 6th May 1982, but left the UK on 6th October 1984 for Hong Kong where I continued my masonry in the Corinthian Lodge of Amoy No 1806 and found a taste for many of the progressive Orders, one of which was Knights Templar.

I was installed as a Knight in the Province of the Far East in the Victoria Preceptory No 78 on 22nd November 1991, but left Hong Kong in 1993 and then found refuge in Hyde Preceptory No 98 in Dorset & Wiltshire on 7th October 1997 where I have since enjoyed KT Masonry.

I hold Grand Rank in Mark, Red Cross of Constantine, R&SM and Allied and Provincial rank in Craft, Chapter, RAM and OSM and am a member of KTP, Royal Order of Scotland, Operatives, Scarlet Cord, KBHC and Rose Croix.

My hobbies apart from Freemasonry are Scouting, Brownsea Island , flying and motor-homing and I also spend time as Director/Owner of an Aviation Certification Design Organisation and a small property management Company.

I live in Wimborne, Dorset with my wife Anne.  We have a son who is a member of Red Scarf Lodge and together we manage our Company ATL.

The Province of Dorset and Wiltshire is the oldest Province in the Order, having been 'Erected' by the Duke of Sussex, then Grand Master of both the United Grand Lodge of England and the Great Priory of the United Orders of the Temple and of Malta, in 1836.

The Provincial Prior of Dorset & Wiltshire, R.E.Kt. John Walter Cave, accompanied by his Provincial Sub-Prior, E.Kt. R F Micklefield, joined the Eminent Preceptor and Brother Knights of St. Aldhelm Preceptory No.492 in Malmesbury when it recently organised an ‘open evening’ to ten prospective members eager to learn more about the Order.

Following a warm welcome from the Eminent Preceptor the guests were treated to an exemplary and insightful presentation given by the Provincial Prior, which covered the following areas of interest:

Following a ‘questions and answers’ session the guests were invited to attend the Festive Board, where they were wined and dined as guests of the Preceptory.

The Eminent Preceptor would like to thank everybody who took part in this initiative.  The evening was considered a huge success and the Preceptory is delighted to confirm that three of the ten guests have requested applications forms to join the Order. 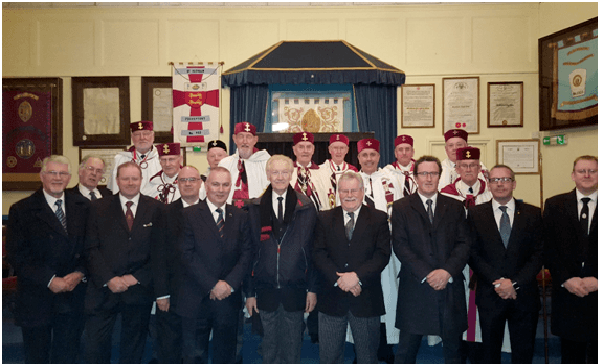 This article and picture was provided by Alan Lester, Deputy Commander of the Provincial Prior’s Bodyguardy.

The Provincial Prior of Dorset and Wiltshire with his counterpart in Gloucestershire and Herefordshire  achieved a rare fraternal visit at St Aldhelm Preceptory Malmesbury on Monday 12th December.

St Aldhelm Preceptory acted as host for the evening in what was the first occasion the two Provinces had come together with the meeting being such a great success that a future date for a reciprocal meeting, probably in Cirencester is being arranged.

St Aldhelm Preceptory was fortunate to haveW Bro Geoffrey Hunt as a candidate for Installation as a Knight of the Order.

The evening produced  a total of 34 visitors from both Provinces. Members of the Province of Gloucestershire and Herefordshire participated in the ceremony which made the evening a spectacular event for the candidate. 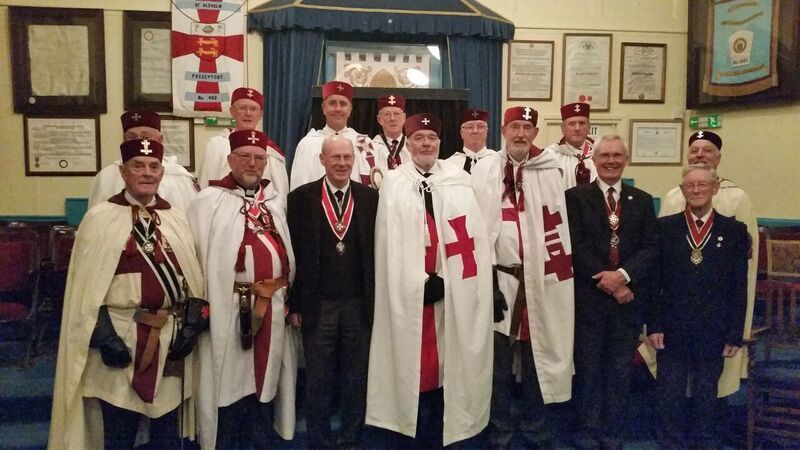 This article and picture was provided by Michael Sharp of St Aldhelm Preceptory Malmesbury.